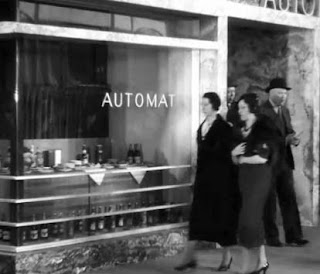 The consensus:  screenwriting credits by Preston Sturgess make a formulaic plot enjoyable, and top talent helps the cause.  The set-up:  Thirty Day Princess (1934, directed by Marion Gering) is set smack in the middle of the Depression and stars Cary Grant as Porter Madison III, a newspaper editor out to take down fat cat bankers.  When he hears word that the Princess of Tyronia is coming to New York as an introductory tour in hopes of securing an international loan arranged by one of those bankers, he becomes suspicious and sets out to investigate.  On the other side, the Princess Catterina (Sylvia Sidney) has contracted mumps and cannot fulfill her public duties.  The fat cat banker (Edward Arnold) looks for and finds a ringer in Nancy Lane (also Sylvia Sidney), a down-on-her-luck actress who takes the part of the Princess.
I find the opening few sequences where the King of Tyronia meets the banker pretty interesting.  The King, who cannot even afford to give his daughter money for the movies, says he would like to give the peasants of his country electric lights and heat.  The banker asks the King how much he would need.  "Oh, about 5 million," says the King.  "No, no!" replies the banker, "50 million!"  Ring any bells?

An automat is an extinct type of restaurant first brought to the U.S. in the early 1900s, modeled after a Berlin restaurant, the Quisisana Automat.  Automats had been in Europe since the late 1800s.  In this type of eatery, one would get change from the cashier, then pay for meal items by inserting nickels and drawing the items one selected out from behind small glass-and-chrome doors.  Trays were available to carry the food, and, much like a cafeteria, a tray-slider was in place below the food cases, so that one could move down the rows, looking at options.  The kitchen was located behind the 'wall' and slots were refilled from the kitchen.  Food included items such as Salisbury steak, chicken pot pie, creamed spinach, rice pudding, baked beans, blueberry pie and many others, all of which were subject to high quality control standards.  Spigots were provided for coffee and other drinks.  Seating was also cafeteria-style, with a group of tables and chairs in the middle.  Side note:  the automat or studio set featured in Thirty Day Princess seems to be the same one where the great food fight scene in Easy Living was shot.
Horn and Hardart were the entrepreneurs who brought the European model to the U.S., opening the first restaurant in Philadelphia in 1902.  From there on it was expansion time, and many Horn and Hardart automats would open up in Philadelphia and New York.  Competitors, who could see how well the H&H model worked, would open up other restaurants as well.  Drive-in restaurants struck a blow to the automat model of business in the 50s and 60s, and by the 1980s, with fast food becoming commonplace nationwide, the few automats that were left were hanging on by a thread.  Since the last Horn and Hardarts shut down in 1991, there have been several attempts at revival, but none have been successful in the long term


A kiss on the hand may be quite continental
but diamonds are a girl's best friend.
A kiss may be grand, but it won't pay the rental
on your humble flat, or help you at the automat...
-Gentlemen Prefer Blondes 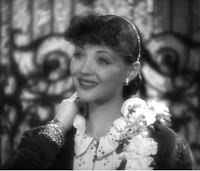