Monkeypuzzle: The Ghost and Mrs. Muir 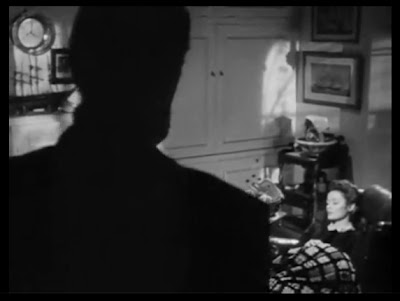 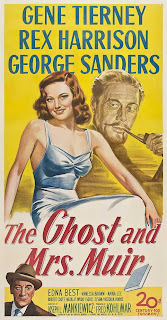 If this isn't the most misleading movie poster, I don't know what is - I wonder how many males it lured into seeing this sweet romantic film with the expectation of Gene Tierney in tight-fitting evening wear. Instead she spends the bulk of the film wrapped in turn-of-the-century widow's weeds and long gowns with her hair in a prim bun.
This is just a great movie.  The Ghost and Mrs. Muir (1947, directed by Joseph L. Mankiewicz) is a quiet romance, but all of the main characters have enough edge and willfulness that the story never turns saccharine, and the minor players are acted with humor.
The story opens with Lucy (Gene Tierney), widowed for a year, declaring to her in-laws that it's time for herself and her daughter to move out.  This doesn't go over well, but Lucy is determined.  She takes herself to the rental agent and, after seeing and admiring Gull Cottage, she determines on the spot to take it.  The agent is concerned, but rents it to her.  She, her daughter Anna (Natalie Wood) and their longtime housekeeper Martha Huggins (Edna Best) move in, but it isn't long before Lucy discovers that the cottage is haunted by its former owner, an adventuring sea captain (Rex Harrison)...

There is such a thing as a monkey puzzle tree (Araucaria araucana), and they are apparently very popular in botanical gardens and as decorative trees.  Originally from Chile and southern Argentina, the monkey puzzle is a type of evergreen or conifer with very persistent leaves that can last for 10-15 years.  In its native range, the monkey puzzle grows in the lower-middle elevations of the Andes in areas receiving high snowfall in winter, and it can grow up to 70 feet tall.  As mentioned previously, it's a popular choice for decorative gardens in other regions as long as the climate is temperate - such as coastal England, where The Ghost and Mrs Muir is set.
The Captain was right - the 'Monkey puzzle' name comes from a specific anecdote, where an owner of one of the earliest examples of the species grown in England, in around 1850 in Cornwall, described the tree as something that would 'puzzle a monkey to climb'.  The species was first introduced to England in 1795 by the naval surgeon on Captain George Vancouver's ship, who had been served a meal of the seeds in Chile.

The monkey puzzle is the national tree of Chile, and is currently listed as Vulnerable on the IUCN (International Union of Conservation of Nature) Red List because of logging for timber and for the creation of agricultural land in its native range.  Current conservation efforts include mapping the distribution of the plant and developing infrastructure for restoration.  In addition to being a popular decorative plant, the seeds of A. araucana have been used as food by the Chileans.  The seeds are easily harvested when the cones drop, but this has not been developed as an agricultural crop because it takes a monkey puzzle 30-40 years to mature enough to produce seeds - a real barrier to efforts to restore naturally-propagating forests. 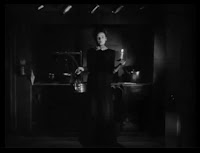